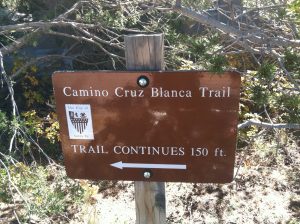 A sign erected by the City to let trail users know about the gap. 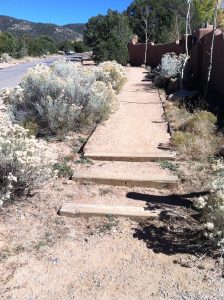 The Camino de Cruz Blanca Trail is a four-foot-wide soft-surface trail along Camino de Cruz Blanca that connects the St. John’s Trailhead to the Dorothy Stewart Trail, Dale Ball Trails, and the Atalaya Trail.  This project responds to a request from the City of Santa Fe to construct a 90-ft.-long gap where the trail was never built.  It is a little different from our typical trail work, involving the preparation of a four-foot wide surface with weed barrier, metal edging, and crusher fines.  We also put in wooden steps, all in line with the way the rest of the trail was built. 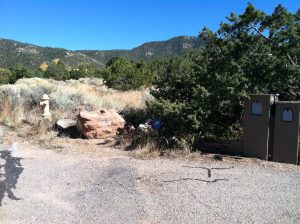 Apparently the original owner of the lot where most of our work is focused was the only one who did not grant the City an easement when the trail was originally built around ten years ago.  The City received an easement when the land was sold and subdivided in 2007, but the missing piece was never built – until now. 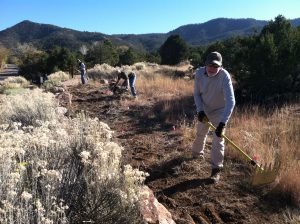 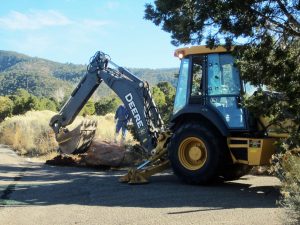 City Parks staff moved boulders for us the day before the volunteer work started (Photo by R. Kasal).

The gap starts and ends at the driveways of adjacent landowners.  All three landowners were not only cooperative but actively supportive of the effort to complete the gap.  This was also a model cooperative effort with various city staff: City Trails staff helped survey and mark off the pedestrian easement.  City Parks staff played a big role in gathering and delivering materials, including edging, stakes, wooden steps, and crusher fines for the tread, obtained with support from the Road and Trails Engineering section.  City Parks also supplied the motorized muscle-power to move a few boulders that were in the way. 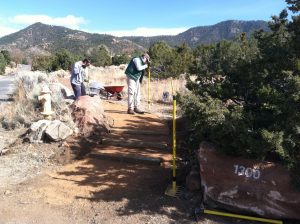 Seven city trail volunteers worked on the Camino de Cruz Blanca with the Trails Volunteer on Tues., Nov. 11, clearing and grading the four-foot wide surface, and using the extracted dirt to take care of some maintenance needs up the existing trail.  After a Thursday morning work session was cancelled due to freezing temperatures, a smaller crew of three met with the coordinator on Friday, Nov. 14, to put in the steps and start laying out the four-foot wide surface from the west end.  One more work day with seven volunteers on the afternoon of Tuesday, Nov. 18, and the trail was completed.

This job put us over 600 volunteer hours on city trails under the Trust’s coordination in 2014, the first year of our contract with the City of Santa Fe.  Given the temperatures and snow on the ground, this could wrap up the season.  Thanks to everyone who has pitched in to improve our wonderful city trails! 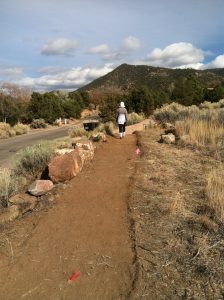 Users enjoyed the new trail well before it was finished. 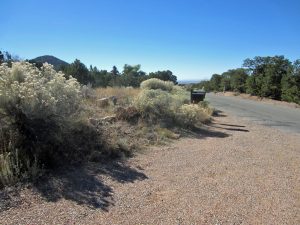 East end off the gap – before (photo by R. Kasal). 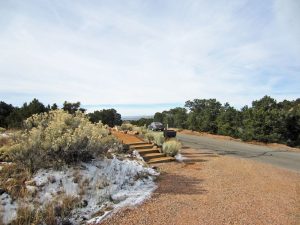 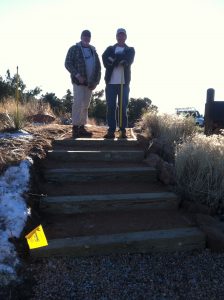 This has been a fun and educational project.  Some of the volunteers participated precisely because they use this trail all the time!  We also got a lot of positive comments from passers-by, who will not have to walk in the road any more on the way up to our foothill trails. 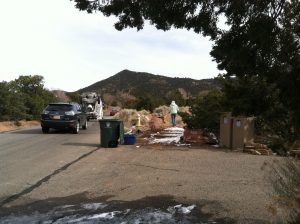 No need to walk in the road any more! 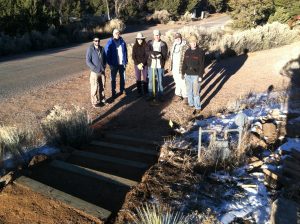 Volunteers at the end of the final day, shadows getting long! 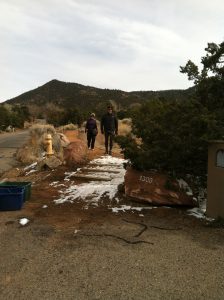 Some satisfied users, the next morning after the section was completed.