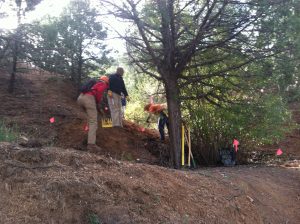 Nine volunteers joined the Trail Volunteer Coordinator to start work on a re-route of the Dale Ball Trails above Junction 29, on land owned by The Nature Conservancy.  This is our first trail-building job under our contract with the City of Santa Fe.  It is a tricky re-route due to the grades that we are dealing with to get up from the meadow to the existing trail.  Even more tricky considering that we climb up to and cross an active irrigation ditch – the Acequia del Llano.  Thankfully we are able to cross it at a location that is already covered. 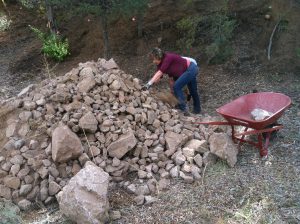 Bev Van Santen, visiting Santa Fe from California, picks away at the pile of rocks that we are using to build up to the trail where the steep acequia bank is eroded or unstable. 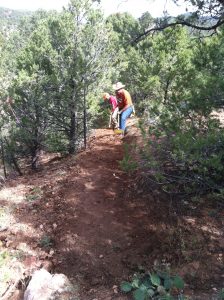 Henry Lanman and Todd Van Santen cut the bench for the top section of the re-route.

Special thanks to Bob Findling of the Nature Conservancy, who initiated this project, was on hand to help oversee it, and who had supplied a truck-load of rock that we used to fortify sections of the trail that could not be cut into the steep acequia bank.  Thanks also to Mike Cruz, mayordomo of the Acequia del Llano, as well as Richard Ellenberger of the Acequia Association, who gave the project their blessing. 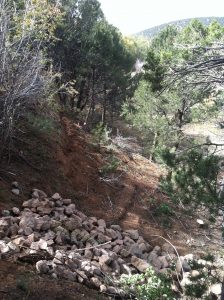 Looking back toward the green gate on Upper Canyon Rd., arroyo crossing on acequia bank in foreground: We still have our work cut out for us. Many thanks to our experienced volunteers for helping to come up with an optimal alignment for this trail.

We’ll all be back next Tuesday to continue this effort.