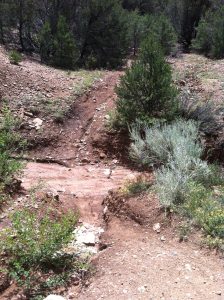 The crossing as it appeared in July, already in bad shape even before torrential August rains dug the groove in the trail deeper. The small groove at left is the historic route of drainage from the culvert before it jumped to the right, into the trail.

Seven volunteers joined the Volunteer Coordinator at the Dale Ball Trail crossing of Hyde Park Rd. for a special project: to improve the crossing of the Canada Ancha between Junctions 10 and 11.  There is long-term interest in a more permanent solution to this problematic crossing, such as a bridge, but for now we did our best to separate a culvert flow from the trail as it enters the arroyo from the north.

We also smoothed down the ramp down the south bank of the arroyo and put in some preventative grade reversals and drains further up the trail to the south. 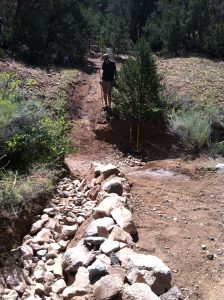 Ted Larsen surveys the new crossing from the south bank of the Canada Ancha. Dirt at lower right is the new trail surface, packed hard on top of rock fill with the help of an ocassional sprinkling of water. Stones at left are within a separate gully that was dug deeper in order to contain the flow coming out of a culvert under Hyde Park Rd.

We stood at this crossing several times last Spring and Summer, wondering what to do.  Now that we put a full morning’s work into it, with a crew of eight, the Canada Ancha is easy and fun to cross and hopefully it will withstand more than a few rainstorms and still be that way.

Thanks to all the volunteers and especially to Ted Larsen, who suggested that we work on this problem and then came out to put in plenty of his own sweat equity.