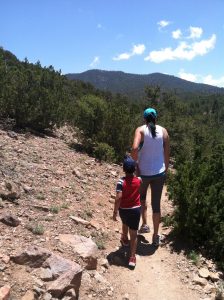 Returning from the loop on the Dorothy Stewart Trail, with Atalaya Mountain in the background.

SFCT celebrated National Trails Day in 2014 by partnering with the City of Santa Fe, the Trails Alliance of Santa Fe, and La Familia’s REACH Program to encourage Santa Feans to ride Santa Fe Trails’ “M” Bus to the trails on Sat., June 7.

A group of about 20 participants met at the Dorothy Stewart Trail, which is a half-mile walk on the “Camino Cruz Blanca Trail” from the nearest bus stop, on Calle Picacho, or from the nearby St. John’s Trailhead.  SFCT’s Executive Director Charlie O’Leary provided snacks, refreshments, and trail literature for arriving and departing hikers at the trailhead. 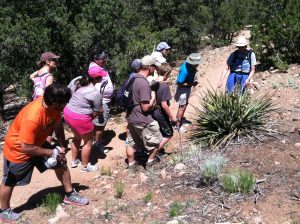 Karen Denison gives some pointers on a flowering yucca.

Karen Denison of Outspire Hiking and Snowshoeing led an outstanding interpretive hike highlighting the many beautiful flowering plants that were in bloom that day.  She followed up with a list of the plants that we learned about, roughly in the order they were introduced.  Thank you so much, Karen!

Ya mero! Almost back!  (And still all smiles!) 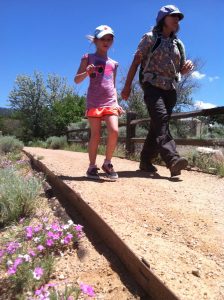 Camino Cruz Blanca Trail: Passing by some Santa Fe Phlox flowers on the way back to the bus stop.

Nohemy Bojorquez-Flores of La Familia Medical Center’s REACH program helped to successfully spread the word about this event on Santa Fe’s South Side.  Thank you, Nohemy!  SFCT’s Trails Program Manager, Tim Rogers, provided interpretation in Spanish for some of the hikers.

We got some good upfront publicity (twice!) as well as some good post-event coverage in the Santa Fe New Mexican – thanks to Will Webber and the Outdoors Section staff.

Special thanks also go to Joey Mascarenas, who came along and spread the word about this hike via twitter: