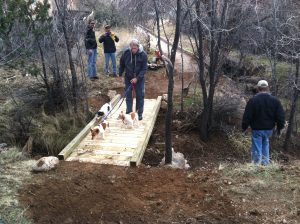 Brent Bonwell and Henry Lanman, Santa Fe Fat Tire Society’s master bridge builders, led a crew of six volunteers and the City Trails Volunteer Coordinator in replacing a four-foot wide bridge in Calle Lorca / Southridge Park.  Materials for the bridge were supplied by the City Parks Division.  Compared to past SFFTS projects in far more remote locations along the Winsor Trail, in the Santa Fe National Forest, this Presidents Day bridge effort was a “piece of cake.” 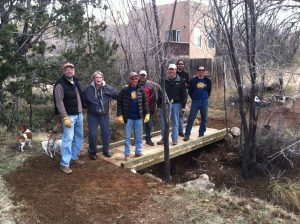 The volunteers pose on the finished product with Mr. Squires, who brought the need to replace the bridge to the city’s attention many months ago.

SFFTS, the Santa Fe Conservation Trust, and the City Parks Division are happy to say that the route in from Placita de Vida is literally “a walk in the park,” now starting with a sturdy refurbished bridge to make the connection.

Thanks to all involved, including the local residents who had first contacted the City about the need to replace the old bridge, who were among the first to use the new structure.