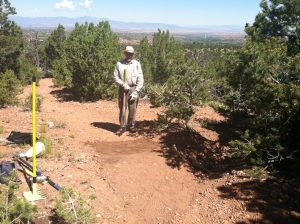 Russell Fory stands behind a new grade reversal directing water off of an eroded, gullied section of trail.  We are trying to build features that will blend in and last, as opposed to temporary “speed bumps.”

“Couldn’t volunteer, but I ran there Thursday evening. Good fixes, thanks!”

Six volunteers joined the Trail Volunteer Coordinator on June 17 to perform specific maintenance tasks on the northeast loop (Junctions 1-2-3) that had been scoped out the previous week. 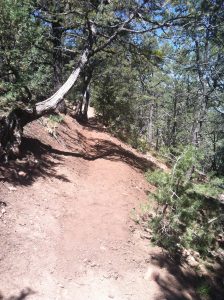 Tree v. Trail #1. We tend to prize our shade trees in New Mexico, even when the shade provided is minimal.  Moving the tread down and out was a simple solution for hikers and bikers (Team Washburn-Maes-EauClaire). 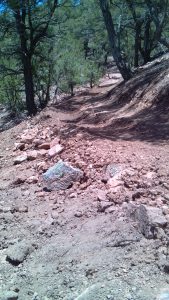 Tree v. Trail #2: Cyclists were missing this downhill turn because of the combination of a leaning tree and a steep cross-slope. Not a particularly ankle-friendly spot for hikers, either. Now everybody can stay on track (Team Lanman-Neumann; Photo by Rainer Neumann).

The work day was inspired by a couple of points where a decision had to be made, trail vs. tree.  In both cases we moved the trail down and over, replacing a steep cross-slope and tree hazard with a new, clear bench cut with a short bank, to create a relatively flat area for hikers to pass through as well as something for cyclists to turn on.  The group also built a grade reversal, cut in a few drainage nicks, and de-bermed some built-up banks along the lower edge of the trail in order to allow water to flow off of the trail. 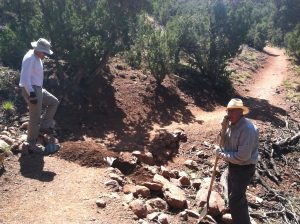 Two metal culverts had been blocked up over time by rocks and sand, resulting in water eroding the trail tread and exposing the culverts. Volunteers cleared and buried both, and packed a smooth trail tread over each so that users will hardly notice the culverts now. 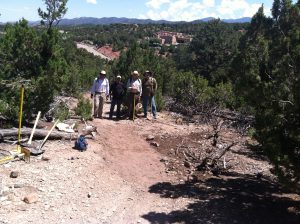 Storm water used to stay left down this hill, creating a gully in the trail tread. After volunteers put a nick and a rise at this location, the water will head to the right, off of the trail.

Four volunteers and the trail volunteer coordinator returned the following week for some touch-up work on the northeast loop, including emptying and covering over a pair of culverts under the trail, and to put in a nick and grade reversal to clear water away from a problem section (known by some as the “White Rock” section) west of Junction 4.  The group was joined by Melissa McDonald of the City of Santa Fe to look at issues and opportunities along the Canada Ancha, south of Hyde Park Rd.