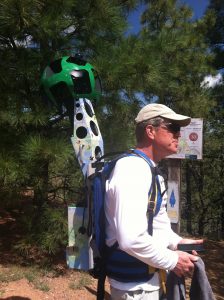 At the request of the City’s tourism department, TOURISM Santa Fe, SFCT’s Trails Program Manager organized and programmed volunteers to hike area trails with the “Google Trekker” apparatus: a 50-lb. bundle of fifteen cameras, computer hardware, battery, and backpack controlled by a cellphone in the user’s hand.  The product of the recordings will be a simulated walk along selected trails that should be available from Google in December 2015. 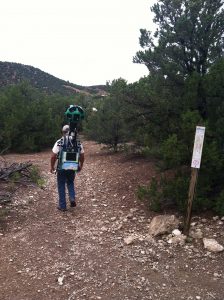 Volunteers were hand-picked for “sturdiness.”  Special thanks go to Manny Maes for making it to the opening training and organizational meeting and mapping the way forward from there.  Also thanks go to City Parks staff members who helped out Google-trekking in the north and central sections of Dale Ball Trails.  A complete list of participants recruited by Santa Fe Conservation Trust for this activity includes: 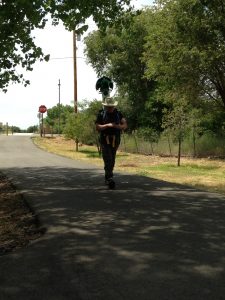 Thanks also go to Steve Washburn of the Trails Alliance of Santa Fe, John Alejandro of the Mayor’s Office, and Charlie O’Leary of the Santa Fe Conservation Trust for providing rides to or from trailheads, making it possible to walk the Google Trekker one-way instead of having to back-track on urban trails. 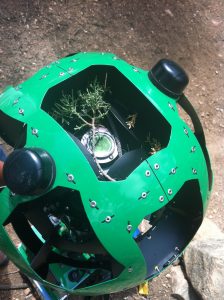 The Trekker device extends another foot over the user’s head, enough to brush up against low branches in some locations where perhaps the trails could use some trimming. 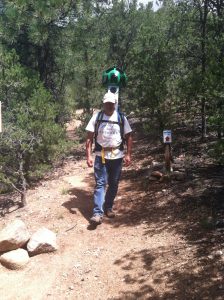 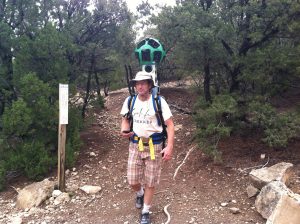 By the time TOURISM Santa Fe returned the Trekker, after tacking on an extra week in August, SFCT staff and volunteers recruited by SFCT had completed Google Trekking the following trails and parks: 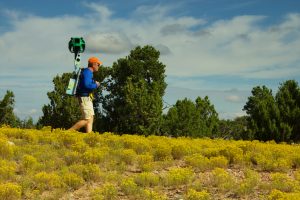 The Trails Program Manager has also helped guide volunteers to TOURISM Santa Fe for some daunting work to Google-trek selected Santa Fe National Forest trails (Aspen Vista Trail and Winsor Trail) and County Trails (La Piedra Trail and Little Tesuque Trail).  We will see the fruits of our labor when Google posts the Trekker recordings, which will resemble Google’s “Street View” for our trails, by the end of the year.

In addition to the promotional value identified by TOURISM Santa Fe, we look forward to using the Google Trekker footage as an assessment tool in the form of a 360-degree-view recording of our City trails at a given point in time.  Thanks volunteers, for schlepping this thing around with me!