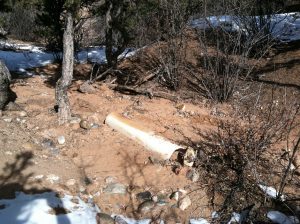 Four out of the five culverts originally installed on the “Upper Vista del Freeway Trail” had failed, filling with sand and becoming exposed as drainage eroded away the trail surface crossing over them. 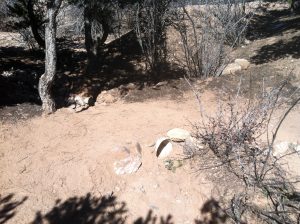 The same culvert after volunteers improved drainage flow above and through the culvert and re-packed the trail surface crossing over it. 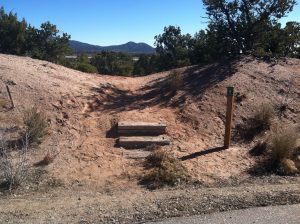 Volunteers also shored up the trail at its upper access point, off of Via Arista. State highway US84-285 appears in the background.

Four volunteers joined the Trails Volunteer Coordinator at the “Upper Vista del Freeway Trail,” a single-track trail that connects Via Arista to Avenida Rincón northwest of the interchange between US84-285 and the Santa Fe Relief Route.  This location was chosen because the trail is primarily south-facing and had some very specific maintenance needs to be addressed.

The primary task of the day was to clear out three culverts and re-pack and reinforce the trail surface crossing over them.  One more culvert was simply removed and the trail surface reinstated in its place.  The volunteers also de-bermed a problematic section of gullying near the bottom of the trail, which ends with some large stone steps located across Avenida Rincón from the paved Cañada Rincón Trail. 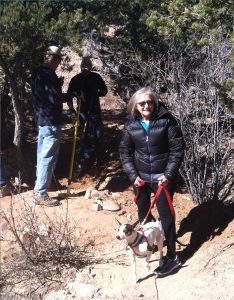 Local city residents were the main beneficiaries of this work. Pictured here are Gloria Garber and her dog Zorra. As we completed the fourth and final culvert repair, an elderly couple appeared using walking sticks, to be the first to take advantage of the improved trail surface.