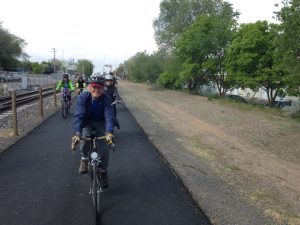 Roughly 22 people on bikes joined this year’s “CommUnity Cruise,” a group ride from Second Street Brewery to the plaza, where the City was holding its “CommUnity Day” event.
The ride was billed as a “kick-off event” for Bike-to-Work Week and featured many of the classic urban trails, “short cuts,” and mellow roads featured in previous cruises as well as a few lesser-known trails, one of which indeed none of the participants had used before. 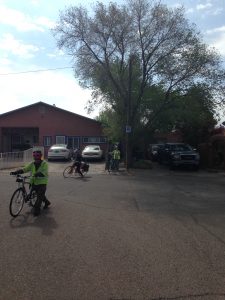 Emergence from a critical Rail Trail connector that will be improved in the near future!

Three current Bicycle and Trails Advisory Committee members and long-time BTAC Chair Patti Bushee were present, as were staff from the Santa Fe Metropolitan Planning Organization and Santa Fe County, and a member of the Sierra Club also engaged in trail planning efforts. 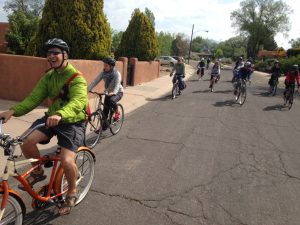 Otowi Dr. and other roads along the Acequia Bikeway are a “piece of cake” 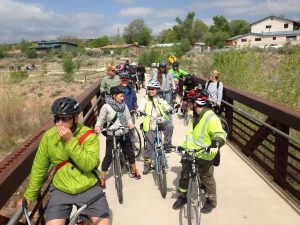 A pause coming up the River Trail, with a few newcomers about to join the Cruise (like it or not) 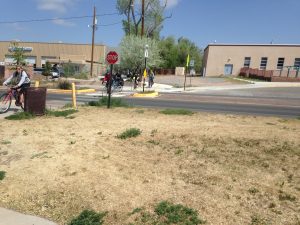 Of 22 riders surveyed, none had tried out the new trail behind Gonzales Community School, with direct link back to the River Trail, for us 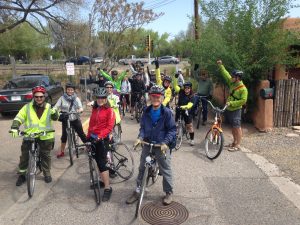 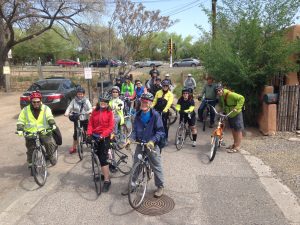 Group photo #2, before breaking up (hard to do!) 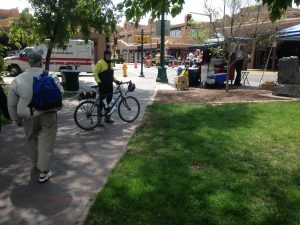 Riders were treated to a variety of trail planning tid-bits and historical factoids along the way, and I think everyone learned something about getting around Santa Fe on a bike, which is the whole object of these rides, in addition to having a lot of fun together along the way.  One “newbie” liked the cruise so much she repeated it the next day, then did it again, before coming on the next week’s Magical History Cruise.