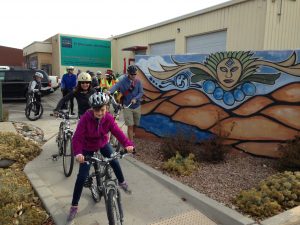 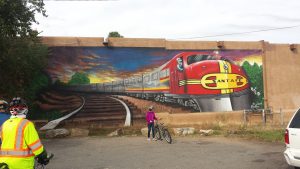 “Super Chief,” by Vela, at the corner of Don Diego and Cerrillos Rd. (photo by Carl Buckland) 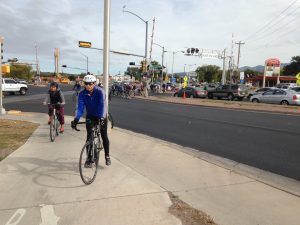 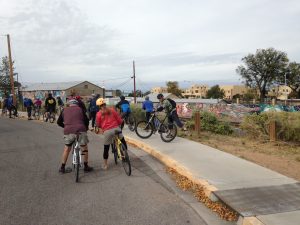 Arriving at the Pen Rd. murals 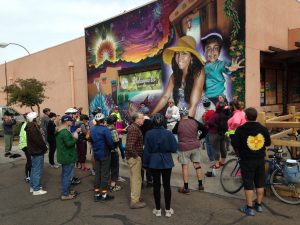 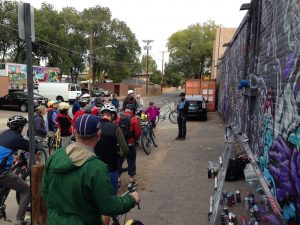 Joerael Elliott describes the process and inspiration behind his “Mural in Progress” on Lena St. 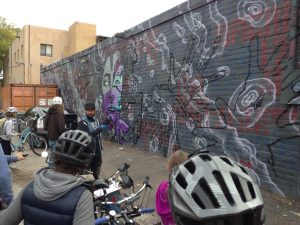 Joerael’s piece represents aspects of the struggle for water in New Mexico, with other political themes interwoven 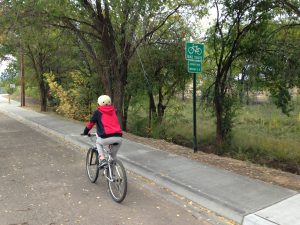 The City’s Acequia Trail wayfinding keeps us on track 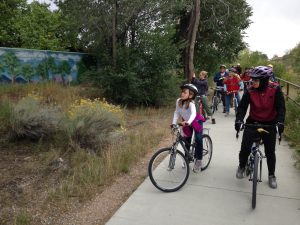 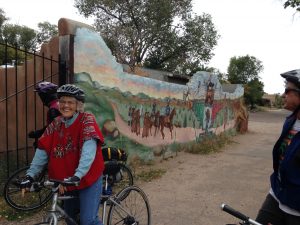 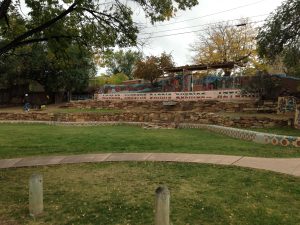 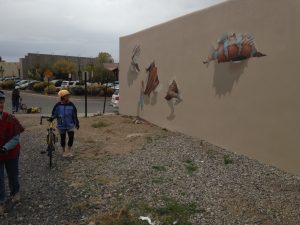 Part of a dragon illusion by John Pugh on the back of the Jean Cocteau Theatre. 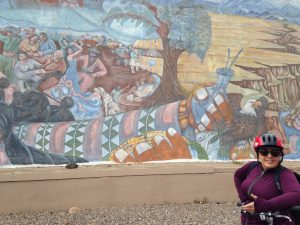 Nearly three hours later, the tour finished at what might be called the “mother of all murals” on Guadalupe St., a piece by Zara Kriekstein, Gilbert Guzman, Jerry Garduno, Frederico Vigil, et al., on the side of the State Archives Building.

About forty cyclists joined the Trails Program Manager for the Tour de Mural, a bicycle tour of wall art in Santa Fe, on Sat., Oct. 8, 2016.  Starting with the “Photo Fence” in the Railyard Park and finishing at the State Archives Building on Guadalupe St., the tour visited about fifty murals along the Rail Trail, Acequia Trail, River Trail, and points in between.  A list of the murals we visited, and others of interest nearby, along with names of artists, is available here: mural-list.

A highlight of the tour was visiting a muralist in action on Lena St.  Snacks and bike service were offered at two locations by Whole Foods grocery store, Rob and Charlie’s Bicycle Shop, and Annapurna restaurant.  Thanks to everyone who helped out and came along, and thanks to all of the artists and community members who created this wonderful art along our urban trails and streets.

We were able to include a visit to wall art inspired by the “re:Mike” event (and featured on the bottom right of the Tour de Mural flyer), which underlined how we might improve our urban environment to fit the human scale embodied in pedestrians and people on bicycles.  A common theme is improving connectivity between people and services through the creation of a more bike-friendly, pedestrian-friendly, and people-friendly environment.  Attractive and provocative wall art along our streets, trails, and even parking lots can help make that happen!

Unfortunately we were not invited onto the nearby, private campus of the Santa Fe University of Art and Design to look at the variety of interesting wall art on their campus.  Maybe next time!