The Kiva Shopping Center on the left is where the ride transitioned from the New Mexico Central Railroad (Acequia Trail and Flagman Way) to old Route 66 along Cerrillos Rd. 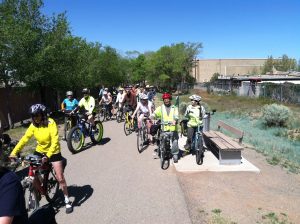 The Magical History Cruise on May 20, 2017, was the second annual running of a “Community Cruise” bicycle ride offered as part of the Outside Bike and Brew festival.   Like the 2016 edition, this year’s ride focused on historic transportation alignments that continue to be integral to local trail planning, and for this reason both rides are also characterized as “GUSTO” study rides.

Not the first Community Cruise to use the wonderful bike lane in front of the Santa Fe Indian School, whose campus until recently featured many late 19th century and early 20th Century school buildings.

While the 2016 edition of the cruise encompassed parts of all three of Santa Fe’s National Historic Trails, this year’s edition focused on 20th-Century alignments, including active and abandoned railroads and historic (pre-1937) Route 66.

A group of 17 cyclists traveled about 10 miles to re-trace parts of the following alignments:

The ride started at the Railyard Park Community Room and ended at the Santa Fe Rail Depot, within view of Tomasita’s Restaurant, which was originally built in 1904 as “Union Station” to serve both the NMCRR and the Chili Line.

Tim,
I have finally participated in one of your amazing Community Cruises! My husband and best friend joined me on the Historical Cruise on Saturday, and we are still talking about it. We had such a great time, learned so much and were in awe of the history you revealed to us. Thanks so much for the many ways you bring us all into the love of cycling, preserving old trails and rail lines, and new ones!!
Sue

Cruisers congregate along the Rail Trail at the southeast corner of the Bruns Army Hospital Line rail triangle, where trains ran toward what is now the Santa Fe University of Art and Design from 1942-46.

The Railrunner provides some assistance by stopping motor vehicle traffic at the Siringo Rd. crossing.

Speaking of railroad history, the Railrunner’s Zia Station was finally opened for use less than one month ago!

The Rail Trail uses a historic trestle that was abandoned when the tracks were re-routed to the east for the Railrunner (bridge at upper left) ten years ago.  This is the only location where it’s a “Rail-to-Trail” rather than a “Rail-with-Trail.”