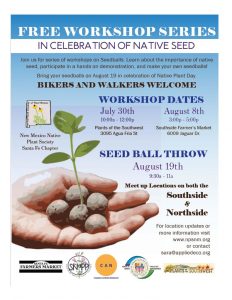 The event was preceded by two seed ball-making workshops, as well as other volunteer efforts organized by Sara Digby of NPS-NM, producing about 2,400 mud seed balls!

On the morning of Aug. 19, SFCT celebrated “Native Plant Day” with the Native Plant Society of New Mexico and the City of Santa Fe by orchestrating a community bicycle ride and walk to distribute over 2,000 native plant “seed balls” on city trails and open space.  The native plant “bombs” consisted of a “Highplains Wildflower mix” and a “Dryland Blend” of grasses provided by Plants of the Southwest, encased in mud by volunteers in the weeks leading up to the event.

Goathead awareness activity between the ball fields, with Paul Cooley displaying the prize-winner at right

Several dozen participants met at Alto Park where pre-fabricated mud seed balls were distributed in small brown paper bags. After a brief “goathead awareness” activity led by SFCT Trails Program Manager Tim Rogers, a small group of walkers “bombed” parts of the River Trail between Alto Park and St. Francis Dr. while about 20 cyclists headed slowly down the Santa Fe River to Frenchy’s Field and then over to the Acequia Trail.

Tribulus terrestris, a/k/a puncture vine.  Now, into the bag with it!

The “bike-bombers” were replenished at the back of Ashbaugh Park with seedballs remaining from the second planned venue, Swan Park, and proceeded slowly up the Acequia Trail all the way to the future underpass site, tossing native seed balls all the way.  One pair of bombers also hit part of the Arroyo de los Chamisos Trail on their way home.

We are looking forward to seeing what pops out of the ground in seasons to come, and to another seed bomb event with NPS-NM next year!

The bombers return home after a successful, fun, and hopefully productive mission – within a few months we’ll be able to continue through the underpass to the Railyard (in distant background)