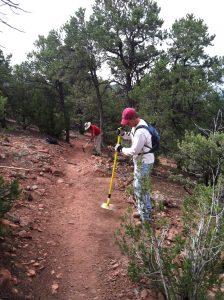 Margaret Alexander and Mike EauClaire de-berm a gully and pack a new surface that should drain the trail tread.

Today’s work brought us to where we left off last Spring after Dale Ball Day, in the area around Junction 10.  We were able to touch up and extend last week’s de-berming work, and higher up, to revisit and touch up last Spring’s work, some of which now appears to have been relatively superficial.

There are certainly a few areas deeper in Dale Ball Central that could use some attention, but we are now ready to shift our focus on to La Tierra Trails for a while.  We will get back to Dale Ball Trails later this Fall when we implement re-routes on TNC land around Santa Fe Canyon. 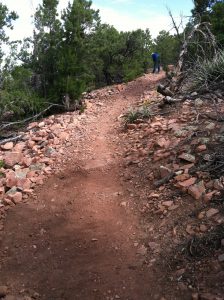 Manny Maes works to re-route water off the trail above a long rocky groove that ends in a another freshly “de-bermed” section in the foreground.