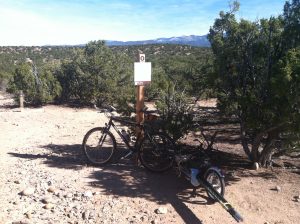 SFCT’s bike trailer was pulled into service for this project, shown above after removal of most of its load at Junction 6.  Henry and Peter lashed most of the posts to wheelbarrows to bring them out to the sites; the trailer worked well with a smaller load and could have handled plenty more.

The City Trail Volunteer Coordinator met with two volunteers from the Santa Fe Fat Tire Society (SFFTS) and archaeologist Stephen Post, also acting as a volunteer, at La Tierra Trails the morning of Nov. 5.  The task at hand was to set up T-posts provided by the City Parks Department in order to mark off three archaeological sites identified by Mr. Post under a contract with SFFTS.  These posts will serve to protect the sites during construction in Spring 2015 of a purpose-built, one-way bicycle “Flow Trail.” 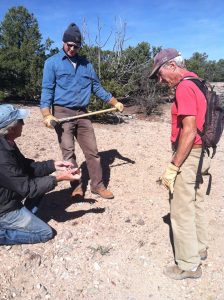 Archaeologist Stephen Post describes how prehistoric visitors to the La Tierra Trails area worked “chirt” into stone points for various uses.  Three of five significant sites found in a survey by Mr. Post are being protected for posterity while the Flow Trail is built. 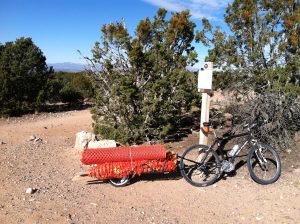 The City Trail Volunteer Coordinator returned to the archaeological sites with fencing material on Nov. 20, to be strung on the posts next Spring.

This specialized trail will be designed by consultants from the International Mountain Biking Association’s “Trail Solutions” team, with financial support from SFFTS as well as the City of Santa Fe, through the Bicycle and Trails Advisory Committee (BTAC).  Thanks to everyone who is supporting this effort to bring more kinds of wonderful trails to our area! 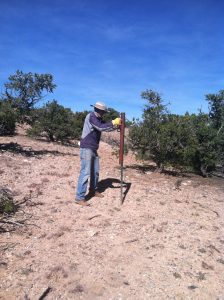 City Trail Volunteer Coordinator Tim Rogers takes a turn to pound in a T-Post near one of the archaeological sites.