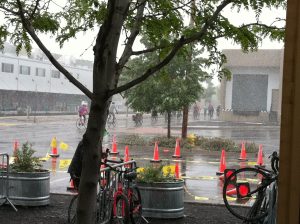 Weather conditions around the time of the canceled 10 am cruise, as seen from Outside Bike & Brew headquarters in the Railyard Community Room.

The Culinary Cruise is a bicycle ride within the Outside Bike and Brew festival showcasing some of Santa Fe’s high-quality gastronomic offerings.  Due to weather conditions, among other things, the 10 am Cruise was combined into the 11 am cruise.  Tim Rogers joined Santa Fe Fat Tire Society volunteers Peter Prince, Bruce Hanby, and Jackie Shane to guide participants from venue to venue. 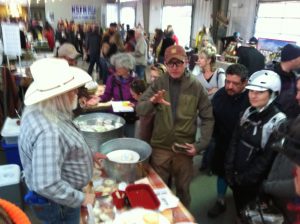 We started at the Santa Fe Farmers’ Market, where Chef Rocky Durham of the Santa Fe Culinary Academy introduced us to some selected local vendors, including: 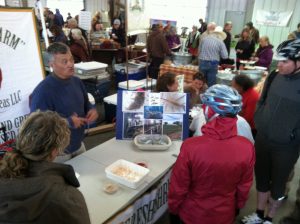 Shrimp – made in New Mexico!

From the Railyard we headed down the Acequia Trail to Ave. Cristobal Colon, then up the River Trail to the Barrio Brinery, the proprietor of which, Patrick Block, was along for the ride on a cruiser bike himself.  (In another couple of weeks, Patrick would join us for the Railyard Community Cruise as well!)  Patrick treated us to a wide variety of delicious, locally-produced pickled products.  If you think you are not a pickle person, head to the Barrio Brinery and Patrick might just change your mind! 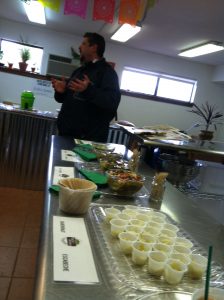 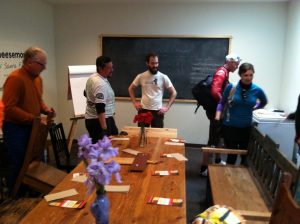 Cheesemonger John Gutierrez sends off happy samplers to the next stop. 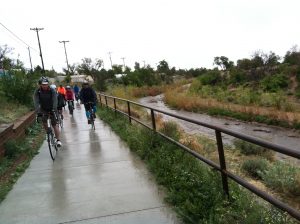 The Culinary Cruise coming up the Santa Fe River Trail: Not a bad way to work off the last samples and get to the next

Next we took the River Trail and W. San Francisco St. to get downtown to visit The Cheesemongers on Marcy St., where sometimes trail volunteer and full-time business operator John Gutierrez treated us to generous samples along with a brief classroom lecture on craft cheese production and the value of eating locally-produced, high-quality foods in general.  Mmmmmm.

After parking our bikes on Water St. we were set up for two more visits: First to the Santa Fe Culinary Academy, where Chef Hillary Ginepra did a short demonstration on making granola and granola bars, and then over to the Draft Station on Santa Fe Plaza, where we were treated to flights of local craft beers as well as delicious box lunches prepared by the Santa Fe Culinary Academy.  Included in the boxed lunches were products that the Academy regularly sources from local producers, including some familiar ones: pickles from Barrio Brinery and cheese from Cheesemongers of Santa Fe. 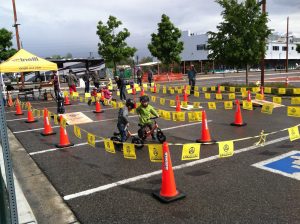 Some other happy cyclists at the Outside Bike and Brew Festival that morning (before the snow!)

What a wonderful way to spend a morning and learn about local trails and local food.  Thanks Outside Bike and Brew, Chef Rocky, and all the vendors that contributed to an absolutely delectable cruise.

Special thanks to Melissa Glick of the Santa Fe Culinary Academy for help in compiling information on our stops on the Culinary Cruise.