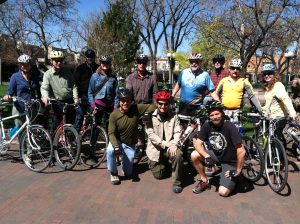 The LAB Bicycle-Friendly Community tour stops at the plaza. Left to right, in back, are Melissa MacDonald of the City, Paul Cooley of the Bicycle and Trails Advisory Committee (BTAC), Keith Wilson of the Metropolitan Planning Organization, Rosa Kozub of NMDOT, Leroy Pacheco of the City, Stephen Newhall of Rob and Charlie’s bike shop, Tim Rogers of SFCT, Khal Spencer of Los Alamos and a board member of the Bicycle Coalition of New Mexico, and Maria Lohmann of Santa Fe County. In front are Bob Siqueiros, BTAC Coordinator, Joe Abbatacola of BTAC, and Steve Clark of LAB.

SFCT’s Trails Program Manager Tim Rogers was asked to arrange and lead a tour of some of Santa Fe’s bicycle facilities in connection with a visit from Steve Clark of the League of American Bicyclists (LAB).  The purpose of the LAB visit was to become more familiar with Santa Fe, which LAB has recognized as a Silver-level “Bicycle-Friendly Community,” and provide some guidance on how to advance our level of “friendliness” to a Gold or even Platinum level. 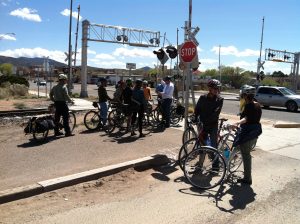 On the Rail Trail, Keith Wilson of the MPO describes the planning process around the St. Michael’s Dr. crossing, one of the more significant infrastructure challenges faced by the city and the cycling public.

The tour started with a route from the Railyard to the plaza, then followed the City (and State) bike route south on Don Gaspar to San Mateo Rd.  Heading west across St. Francis Dr., the group arrived at a stretch of San Mateo Rd. that should have bike lanes, according to the Metropolitan Bicycle Master Plan, but where the City has been slow to take any action.  Before stopping for lunch at 2nd St. Brewery, the tour visited the Rail Trail crossing of St. Michael’s Dr., where MPO planner Keith Wilson described some of the planning considerations around this challenging, unmarked and uncontrolled, six-lane highway crossing.

After lunch, the group proceeded northeast on the Rail Trail to the Monterrey cut-through (soon to be improved) toward Baca St. and the West Railyard, via Flagman Way.  A rid on the Acequia Trail brought the tour to St. Francis Dr., the site of a near-future underpass fo rthe Acequia Trail, and back to the Railyard, where Mr. Clark provided a presentation in the city offices at Market Place. 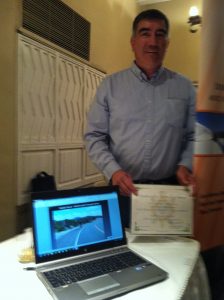 Later that evening, at the Sustainable Santa Fe Awards Gala, Miguel Gabaldon of NMDOT District 5 received an award for the repaving of Rabbit Rd. with smooth shoulders for the benefit of cyclists and pedestrians and through the use of recycled asphalt millings.

Later, in a brief presentation to City Council that evening and in a follow-up communication with the City, including a Bicycle Friendly Visit Report Card, Mr. Clark emphasized the importance of following the existing Bicycle Master Plan, considering a full-time position of Bicycle-Pedestrian coordinator, and providing useful “wayfinding” information for bicyclists on our streets.  Mr. Clark also encouraged exploration of contra-flow lanes, separated bike lanes, and the use of “Advisory bike lanes” on streets with insufficient space for standard bicycle lanes and no center line.