“Thank you for the links, Tim.  The girls and I loved looking at the pictures and reliving our first Community Cruise!  We had so much fun.  Tomorrow is one of their birthdays, and we’re planning another little cruise using the pretty bike trails we learned about on the Cruise.  Many thanks and have a great day.” 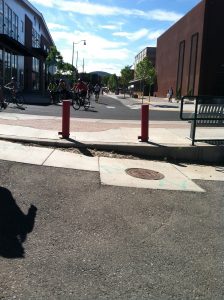 Alcaldesa-W. Manhattan connection from the Rail Trail: An “accidental” but very useful “bicycle boulevard” available since the recent completion of the Violet Crown Theater

Twenty-seven cyclists met at the Railyard Plaza to make the Eighth Annual Community Cruise on National Trails day, June 6, 2015.  The group included families with children, adults who were taking up cycling again, seasoned Bicycle and Trails Advisory Committee (BTAC) members, representatives of Bike Santa Fe and the Bicycle Coalition of New Mexico, and more.  Some participants came from as far away as Albuquerque and Pojoaque to cruise our trails and streets. 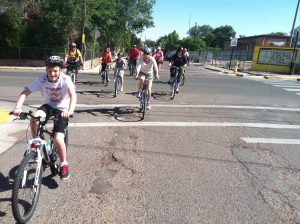 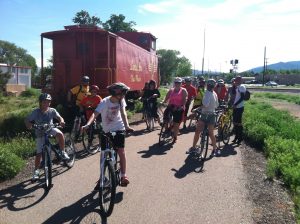 Re-grouping at the caboose, future site of Acequia Trail underpass of St. Francis Dr. – planned for later this year (!) 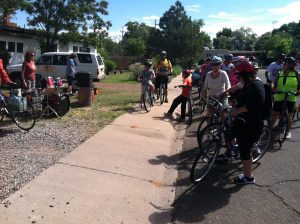 A yard sale on Otowi Dr., part of the Acequia Bikeway

As usual we focused on some of our major city trails – the Rail Trail, the Acequia Trail, and the River Trail – and the connections between them.  This time we also tried a few brand new routes – the Alcaldesa-W. Manhattan “Bike Boulevard” (see photo for explanation) and the newest piece of the Arroyo de las Mascaras Trail.  After about nine miles of easy riding we arrived back at the Railyard, where a few of us had some well-earned lunch at Second Street Brewery. 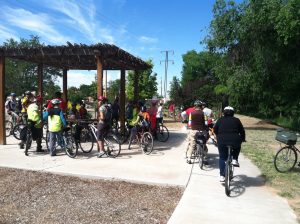 Maclovia Park, west end of the Acequia Trail, for now 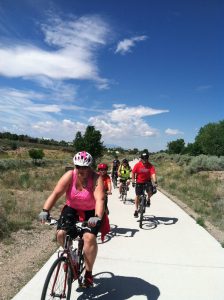 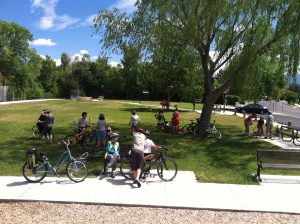 Taking a break at Griego Park on the River Trail, one of seven city parks we visited or passed by. 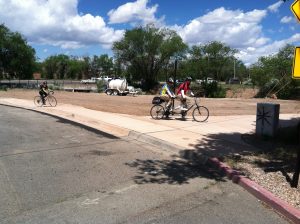 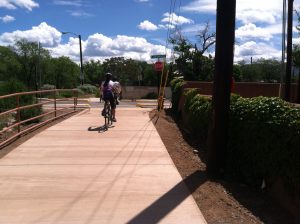 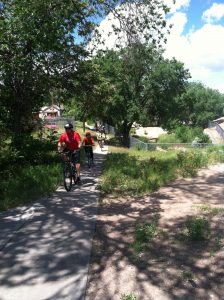 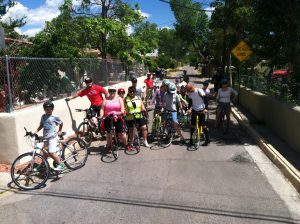 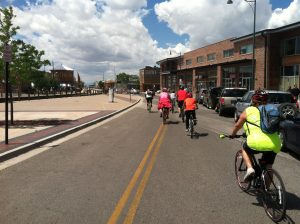 Coming full circle, back to the Railyard

A common question: Why don’t we do these more often?  Well, perhaps we will!  SFCT is already scheming with Santa Fe County for a joint Rail Trail Cruise later this Summer or Fall when the current work on the Rail Trail is complete.  Stay tuned right here for details!