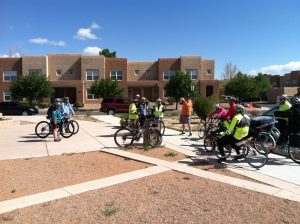 Erick Aune of the Santa Fe Metropolitan Planning Organization describes upcoming events during Bike to Work Week before the cruise pushes off from the South Side Library.  Ride participants include City Councilor Patti Bushee, on cruiser bike at right. 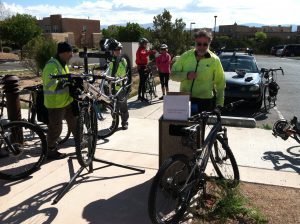 Stephen Newhall of Rob and Charlie’s Bicycle Shop provided mechanical assistance before the ride. In this photo, Joe Abbatacola of the City’s Bicycle and Trails Advisory Committee takes advantage of Stephen’s bike stand for some adjustments. 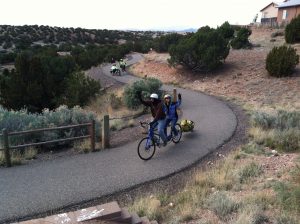 Arroyo Chamiso Trail: A wide variety of “pedalcycles” came on the Cruise.

Over a dozen cyclists braved the wind and cold to visit major existing and planned trails and on-road routes on the second annual South Side Community Cruise.  Starting and ending at the South Side Library, the route was similar to the first edition in 2014 but included a visit to the newly completed first phase of the SWAN Park (South West Activity Node) at the bottom of Tierra Contenta’s Arroyo Chamiso Trail.

This year’s ride also included interpretation on the Camino Real by Steve Burns Chavez of National Parks Services Historic Trails Program at the River Trail and discussion of County and NPS plans to extend a “Camino Real Retracement Trail” north to the Buckman Wells area.  Given the blustery conditions at the time, we did not visit the Relief Route underpass for the “MRC Trail” that will be improved within the first section of that trail. 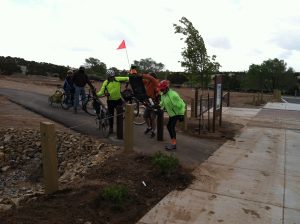 Entrance to the SWAN Park from the Arroyo Chamiso Trail: overzealous measures to control passage by ATVs create a dysfunctional facility for legitimate users. Oft-neglected guidelines specify a minimum of five feet of distance between posts, which if used should be intended to keep out motor vehicles rather than ATVs and motorcycles. 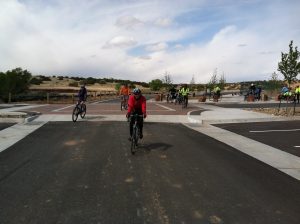 Looping through the SWAN Park: A “raised intersection,” our City’s second, will provide traffic calming once it’s needed. 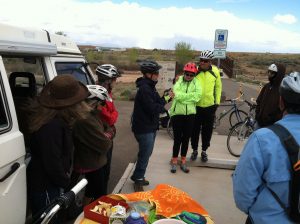 Steve Burns-Chavez of NPS Historic Trails describes the past of the Camino Real as well as its future “retracement trail.”  Lil O’Leary, volunteering for SFCT, brought snacks, drinks, and a little bit of shelter from the wind at the trailhead for the River Trail at the end of Constellation Dr. 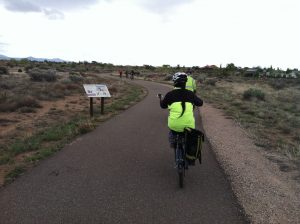 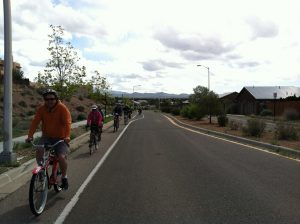 Special thanks go to Stephen Newhall of Rob and Charlie’s, Steve Burns Chavez of NPS, and Lily O’Leary, volunteering for the Santa Fe Conservation Trust, for providing support for this year’s South Side Community Cruise.