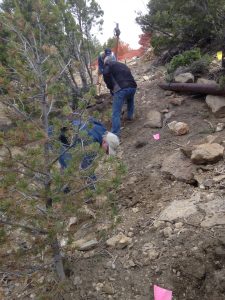 Steep and rocky: A sharp contrast to last job on the Spur Spur! (Apr. 26)

After the City of Santa Fe completed the removal of the old Filter Plant building, the Trails Program Manager and volunteers began work on this long-awaited Dale Ball connector on the morning of April 26, with help from project partner Bob Findling of The Nature Conservancy.

We started at the north end where we worked to convert a challenging, steep, informal trail into an alignment that can be more easily negotiated by a variety of trail users and more easily maintained in the future by volunteers.

Looking south: “Bridge” under construction, leading to some nice tread work (May 9) 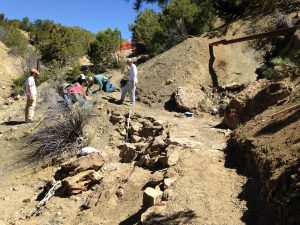 What a difference a few work days make! (May 24)

This work continued on the afternoon of May 9 and the morning of May 19, by which time we nearly completed a stone “bridge” (really, a short causeway with culverts) across a deep arroyo, as well as wide bench cuts above and below to complete the steady climb from the old Filter Plant site to the junction with the Nature Conservancy’s Santa Fe Canyon Preserve trail.

On the morning of May 24, we returned to complete the south end of the “bridge,” add some rock armoring on the outside edge of the adjacent tread, erect some sign posts (awaiting new Dale Ball Trails junction signage to be put up this Summer!), and get a start on clearing the southernmost part of the connection, between Cerro Gordo Trailhead and the Santa Fe River below Two-Mile Pond. 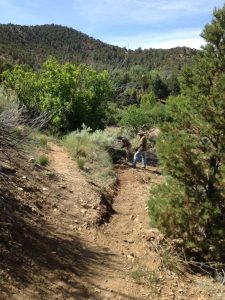 Final piece of tread on the north side crosses the removed fence line to meet the filter plant building site. Trail to left is a remnant of the old “informal” route. 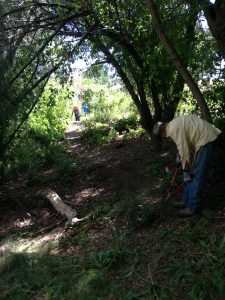 Completing the “jungle” route just north of the Santa Fe River on June 10. 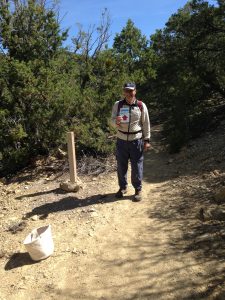 The first northbound trail user – a visitor from San Antonio TX, who was found at Cerro Gordo trailhead wondering how to head north to Sierra del Norte Trailhead – models the Dale Ball Trails sign about to be placed at the new junction for the Nature Conservancy Trail. Southbound users coming from the end of the TNC trail, on the other hand, have been regular guests throughout construction.

On June 10, we were happy to see that the fence along the Santa Fe River had been removed and we made considerable progress bringing the trail to the old Filter Plant building site from each side.

We returned on June 15 and 21 to touch up the bench cuts, relocate signage relating to The Nature Conservancy’s prohibition of bicycles and dogs in the Santa Fe Canyon Preserve, and perform some needed maintenance of nearby Dale Ball Trails – South.

Now we are just waiting for the Water Division’s contractors to complete work at the Filter Plant site so we can finish up and formally open the trail! 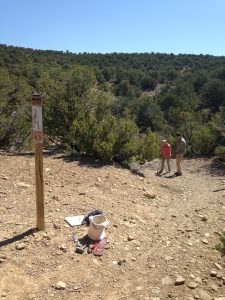 “New” Junction 28 – Where Santa Fe Canyon Preserve signs used to stand, a temporary indicator that Dale Ball Trails have expanded. We are on the verge of purchasing and installing new junction signage for the whole system! Volunteers in the background work on a gully in this newly integrated piece of Dale Ball Trails. 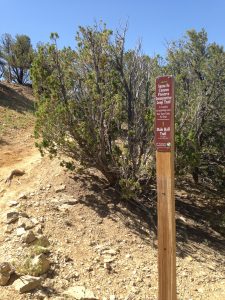 The new “official” junction with the Santa Fe Canyon Preserve trail is much closer to the gate (just up the rise in background) beyond which dogs and bikes are not permitted.