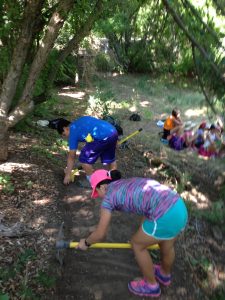 City Summer Campers “de-slough” the top side of the trail to make a wider and slightly flatter trail tread.

Ten City Summer Campers and two Camp counselors joined the Trails Program Manager for a demonstration of trail construction near Cerro Gordo Trailhead and a hike up Picacho Peak on July 29. 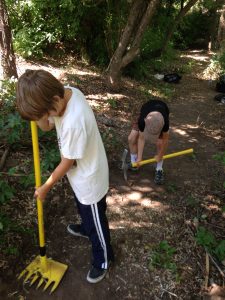 One camper tamps down the tread with a McLeod while the other pries out a rock with a pick-mattock. 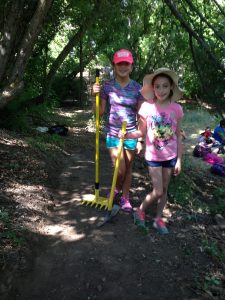 The whole crew and the fruit of their labor at left.

Each camper learned how to use a “McLeod” or a “Pick-Mattock” to help “de-slough” the top edge of a new piece of trail in order to create a more level tread.  When the “demonstration” was done, the campers had significantly improved a short stretch of the “Dale Ball Connector” trail that will be opened this Fall. 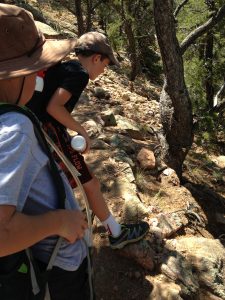 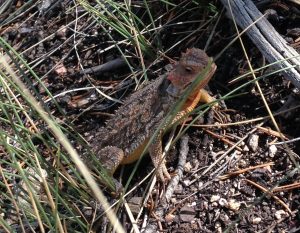 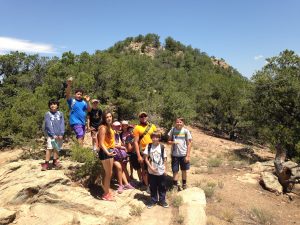 A pause before reaching the peak 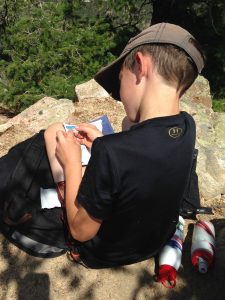 A camper completes the “Dale Ball South” section of his Passport to Trails on the top of Picacho Peak.

After the trail work, the whole group headed up Picacho Peak.  Despite having already exerted themselves, they made it up without a hitch and became just the second field trip group to “bag” the peak.  Two new campers received hiking kits and “Passports to Trails” provided through the support of the S.L. Gimbel and Lineberry Foundations.