Members of the Trails Alliance of Santa Fe (TAOSF) organized several La Tierra Trails work days in March to deal with rubble in the tread and create favorable conditions to drain storm water from the tread, in the event that we should see storm water this year.  Work days days organized by TAOSF help SFCT to fulfill its duties as the City’s “Trail Volunteer Coordinator,” so thanks TAOSF!  On Mar. 13 participants included SFCT’s Trails Program Manager, Tim Rogers, as well as the County Volunteer Coordinator, Carol Branch.

While students from The Masters Program worked on the Little Tesuque Trail, the Trails Program Manager took the opportunity to work with County Volunteer Coordinator, Carol Branch, and volunteer Paul Butt to adjust junction signage and extend the system of “wayfinding” arrows north from Dale Ball Trails.  …Just enough to help people who might otherwise get lost in our burgeoning trail system!

Upstream or downstream, both good options!

Building and Riding on the Dog Park Connector Trail with Students from The Masters Program, Mar. 2

The Trails Program Manager met up with six students and a teacher from The Masters Program to take some of the lumps out of the tread and ride in the Dog Park Connector Trail. 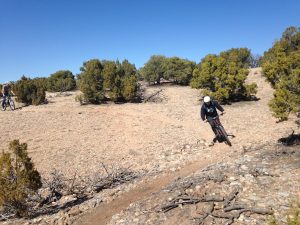 We met at La Tierra Trails’ La Cuchara Trailhead and rode under the Relief Route underpass to get there.  On the way back we sampled the “Wee Whoops.”  A good time was had by all!

Heading back to the trailhead

Bicycle Ride with Students from The Masters Program, Feb. 23

The trails program manager met up on the Rail Trail with Chris Cretella and seven students from The Masters Program who have undertaken bicycle training from Bike Santa Fe.  We proceeded down the Spur Trail to a single-track trail connection to Santa Fe Community College, the “Spur Spur” – which is a GUSTO demonstration project completed in 2016 that the students have already become quite familiar with.

We discussed challenges and approaches to maintenance of natural-surface trails before taking another spin down to Rancho Viejo’s “District Trail” – an alignment along the old New Mexico Central rail bed that the County is planning to eventually extend to Eldorado and the Galisteo Basin.  The students will have their first trail work day with SFCT in March.

Coming into SFCC campus on the Spur Trail Connector

City trail volunteers met with the Trails Program Manager off of Camino de los Montoyas for three work days in February and two in March to put in this single-track trail that connects most of the way from La Tierra Trails to the Frank Ortiz Dog Park – another GUSTO demonstration project!

De-lumping the “home stretch” on March 7

The Trails Program Manager organized this first-ever January edition of the Community Cruise series to take members of the bicycle advocacy community from the Albuquerque area, Gallup, and Santa Fe for a spin before “Bike Day at the Capitol.”

Rail Trail: Waiting to go through the “Hole in the Fence” to get to the West Railyard

Lanman clan leads the way on the Acequia Trail

Successfully passing under St. Francis Dr. and into the Railyard

Cordova Rd., on the home stretch to NM Bike N Sport. The City’s first “road diet” converted four lanes to three lanes here over five years ago, creating space for striped shoulders – a vast improvement for pedestrians as well as cyclists that was replicated later on Siler Rd.

We met folks arriving on the Railrunner from the Albuquerque area at 10 am at South Capitol Station, and headed over to the new Acequia Trail underpass and the Railyard before starting to trace the old Santa Fe Trail south of downtown.  Participants could pick where to close the loop to return on Old Pecos Trail as a sampler of “Bike Route 66,” Adventure Cycling Association‘s 2,000-mile touring route from Chicago to L.A.

We were then hosted by NM Bike N Sport and BikeABQ before joining members of the New Mexico Motorcyclist Rights Organization for “Bike Day” proceedings at the Roundhouse.